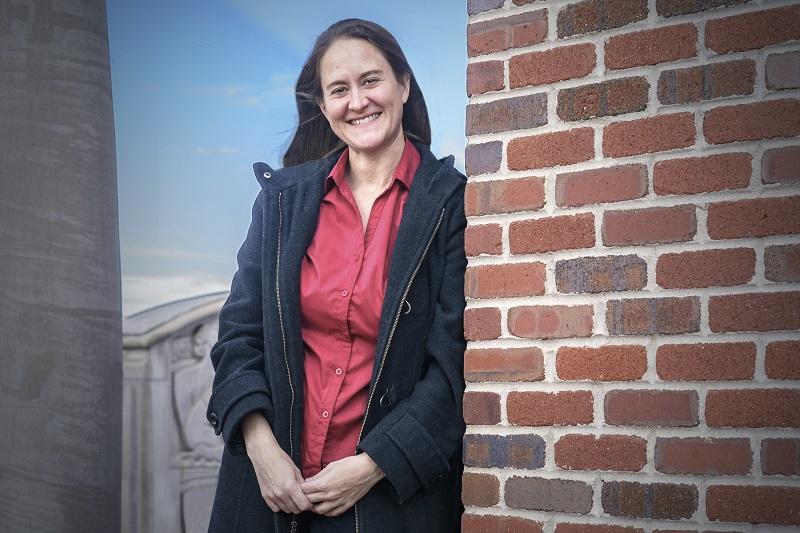 When Chrissy Henderson needs to relax or re-center, she climbs to the top of a 25-foot platform, grabs hold of a slender bar and swings away on the flying trapeze.

“There are elements of fear involved,” says Henderson, a PhD student at the University of Denver’s Ritchie School of Engineering and Computer Science. “I can’t say I don’t always succumb to it, but I love it. I wouldn’t call myself an adrenaline junkie — it’s more of a controlled risk. [And] for me, it’s another thing I can do despite my limitations.”

Not only will Henderson, 40, have fulfilled a lifelong dream when she collects her doctorate degree in engineering at DU’s Commencement ceremony in June, but she’ll have done it as a legally blind single mother of two.

“I like being the unusual one [who] pushes the envelope,” Henderson says. “If someone says, ‘Oh, you can’t do something,’ I’m always going to say, ‘Yeah right, you watch!’ And I think my PhD was evidence of that.”

Born with Usher Syndrome, a genetic mutation that leads to hearing and vision loss, Henderson has been proving people wrong her entire life.

As a girl, she recalls, her peers often wrote her off because of her hearing aids. “‘It’s not going to stay this way,’” she told herself. “‘I’m going to be something great when I get older.’ So that’s what I tried to do.”

After earning an undergraduate degree in physics/space science and a master’s in math, Henderson took a job at the U.S. Bureau of Reclamation and immediately thrived in a male-dominated field. Today, as one of the bureau’s senior corrosion engineers, she designs electrochemical protection systems to prevent valuable metal infrastructure from rusting away.

When she decided to return to school for her PhD, she opted to focus her research on protecting transformer substations from terrorist attacks or vandalism — work of interest not just to her employer, but also to the FBI.

In professor Maciej Kumosa’s lab, Henderson studied abalone mollusks as she searched for an elastic protective coating on brittle pressure vessels. The invertebrate provided insight that led her to an appropriate elastomeric coating, which confines fragments and protects the brittle “bushings” that are used on portions of the country’s power grid.

“It essentially behaves as a confinement for the fragments that result in a brittle transformer bushing when it gets shot,” Henderson says of the coating she helped develop. “It wants to break in a bunch of pieces. The coating confines it so it doesn’t shatter everywhere and hit neighboring equipment or personnel.”

Her research was challenging, of course, but Henderson says the academic work was the easy part. Because she is legally blind, Henderson doesn’t drive. So, getting to and from campus involved hiring drivers, navigating Denver’s transit system, or catching rides with friends and roommates.

All the while, she held her full-time job and even found time to lobby state lawmakers for passage of House Bill 1104, which protects people with disabilities in custody battles. Under the bill, which Gov. Jared Polis has signed into law, courts can’t use a disability as the basis for denying custody or adoption. Henderson was one of the faces at the forefront of the fight.

“I’ve made a lifetime of advocating to get my needs met,” she says. “Even just getting my PhD, I did a lot of advocating for myself. There were plenty of times I was ultimately frustrated with the PhD process and wondering why on earth I was putting myself through this. The ‘piled higher and deeper’ seemed to really apply. I just pushed through. You can’t quit when it gets hard.”

With her new degree and title in hand (“Dr. Henderson” has a nice ring to it, she says), the graduate-to-be is looking forward to expanding her work at the Bureau of Reclamation. And Henderson wouldn’t be surprised if she ended up back in classes.

“No matter what life throws at you, if you have something you want to do, you can do it,” she says. “You just have to find a way. Don’t let life hold you back.”

It’s the way Henderson feels when she’s flying through the air on the trapeze: no obstacles, no barriers.

But mostly, that she can soar as high as she'd like.