Olivia “Oli” Hassan, fourth year mechanical engineering student and President of the DU branch of the Society of Women Engineers, is one of the first cohort members of the Grand Challenge Scholars (GCS) at the Ritchie School of Engineering and Computer Science. Hassan is working on the challenge to “provide access to clean water.” 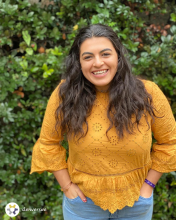 The Grand Challenge program through the University of Denver (DU) allows students to work in teams addressing a chosen grand challenge. In 2008 the National Academy of Engineering (NAE) identified 14 “grand challenges” to solve in the 21st century. To become a grand challenge scholar students must fill out an application, as well as enroll in the Engineering Connections Seminar (ENGR 1511) at DU.

Hassan is originally from Miami, Florida so the idea of working to provide and maintain clean water was of particular interest to her. She said, “Water has been around me my whole life, so I wanted to work on a project where I could be close to home even in the middle of the country.” To meet the community service aspect of GCS, Hassan found a program based out of Miami that has mission trips to the Dominican Republic for building latrines and water filtration systems. She traveled to the Dominican Republic in the summer of 2019 for four weeks to fulfill her community service requirement and learned first-hand about how to bring clean water into communities.

Through the GCS program, Hassan was awarded the chance to travel to London last year for the Global Grand Challenges Summit––she was one of only two students selected from DU to attend. The summit includes GCS students from around the world: 100 from the United States, 100 from China, and 100 from the United Kingdom are chosen to attend. The summit is hosted every two years to bring students together who have all worked within the GCS program in some capacity. Hassan described this as an amazing event and was happy to have the opportunity to network with people around the world, as well as make new friends. She made several friends from the U.K., China, and the U.S. that she still talks with almost every day. Hassan also expressed that it was inspiring to see so many people come together who are all passionate about solving these challenges. They are all working toward a better world.

Working on the grand challenge topic of clean water for three years, paired with her long held passion for oceans brought Hassan to realize that’s what is most important to her. “I want to save the ocean” Hassan said in response to how her GCS work affected her career goals. Hassan always had an interest in the ocean from living so close to it for most of her life. She began scuba diving at 15 where she saw dying coral reefs for the first time and became interested in coral restoration. Seeing the corals dying changed her life.

She is currently searching for graduate programs in ocean engineering and environmental engineering. Her interests lie in filtration systems for micro-plastics in the ocean. “I wouldn’t have realized that I wanted to do this without grand challenges,” Hassan said. Though she is interested in environmental engineering in general, the ocean is her main goal. She has her sights set on somewhere along the west coast for graduate programs, although she is open to wherever she can make the most impact working on ocean conservation. Hassan said, “I’m not going to stop until I can do something to help.”

For any student considering the program, Hassan said, “I’m not going to lie, it’s a lot of work, but the connections you’ll make are priceless.” She also added that it helped her build vital communications and networking skills, which are necessary within the engineering field. Hassan made friends with many people within her cohort at DU, emphasizing how important it is to be a part of a group, especially for first year students trying to make friends in these times.

She wanted first years in engineering to know that the Ritchie School is one big support system, everyone is there to help the students succeed. “Don’t be afraid to ask for help,” she said, “no one is superhuman…there were times I had to get real with myself about what I needed or whether I should take a step back, and that’s okay to do. Don’t shy away from trying something because you’re scared, it’s always better to try than to wonder what could have happened.” Hassan is happy she took the jump and became a grand challenge scholar.