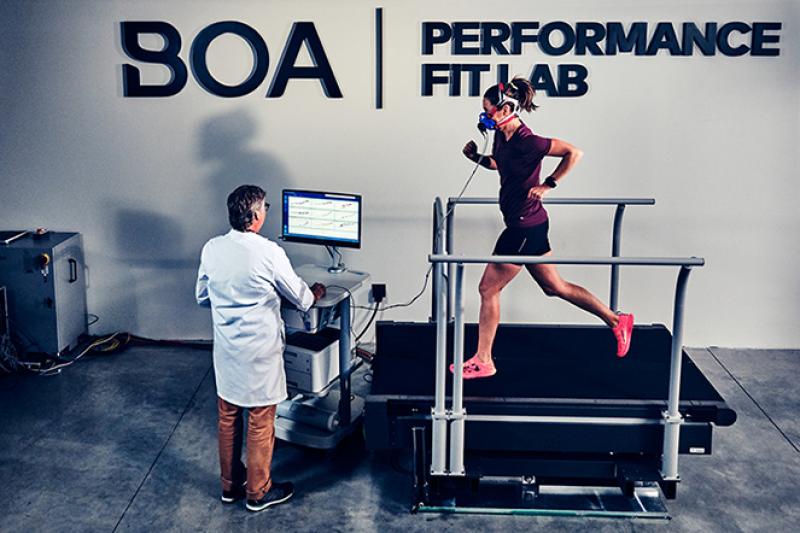 After a 22-year career as CEO of various organizations specializing in athletic footwear and information technology, the University of Denver and Daniels College of Business alumnus had planned to retire to Denver to be close to his mom and sister. Invest. Maybe run a nonprofit.

But as Neville (BSBA ’84) dined with a friend in Boston, temptation got the best of him. BOA, a Colorado-based company specializing in a groundbreaking, fit system technology, was hiring. The company already had seen global success with its snowboarding and cycling footwear, which tightened with the twist of a dial — no laces required. Neville saw potential.

“BOA is not [just] a closure system,” for shoes, he remembers thinking. “If we could scientifically prove that athletes perform better due to innovative applications of our fit system, the potential was to truly transform multiple consumer athletic markets and create a billion dollar business.”

Four years later, BOA’s business has almost doubled, expanding into new markets in athletic, alpine and medical footwear. The growth, Neville says, is due in large part to the creation of the company's Performance Fit Lab. Today, the Denver company is pushing the boundaries of athletic performance, with help from the CEO’s alma mater.

As the company progressed from making parts to making a comprehensive “BOA Fit System,” it called on DU’s Ritchie School of Engineering and Computer Science to prove BOA’s products benefited athletes.

“Can we quantify performance? The answer is yes,” says Bradley Davidson, an associate professor in the Ritchie School’s Department of Mechanical and Materials Engineering.

With his colleague Kevin Shelburne, Davidson was already running a successful Human Dynamics Lab on campus. State-of-the-art equipment and strong backing from national organizations made the lab a go-to location for companies looking, like Nike, to optimize their products. The space, located on the Ritchie Building’s third floor, features an array of cameras and computers capable of measuring the three areas BOA is most determined to improve: agility and speed, power and precision, endurance and health.

“When it comes to quantifying movement, biomechanics is the logical answer,” Davidson says. With Shelburne and a team of graduate students, Davidson took on the task of improving the entire upper portion of a shoe, taking into account comfort and aesthetics.

“We needed a robust, credible source for doing third-party research that validates the improvement that BOA brings,” he says. “We wanted somebody [geographically] close enough that we could collaborate with on a regular basis. DU is a highly respected university. They’ve got a great lab; they’ve done great science. It’s been a great collaboration.”

Davidson credits DU’s position as a small private university, which allows students to nimbly and effectively work across departments and the campus. The relationship, he adds, has been reciprocal, offering students a chance to work in a meaningful professional setting.

“It’s rare to have these encounters where you get to work with your students in a way that launches them and encourages them to really think about solutions that make a difference,” Davidson says. “What we do is often limited to academic journals and textbooks. One thing I want to teach my students is: Go out, be innovative, get together with people that are already creating. Make it so [our work] really has some teeth and usefulness in what we do in engineering and biomechanics.”

Neville, the CEO, has established a formal internship program at BOA and says he looks forward to hiring more and more researchers in the next several years. He hopes DU will continue its integral role as the company further bolsters its reputation as a scientifically backed innovator.

On a personal note, Neville adds, the partnership with DU has enabled him to reconnect to his alma mater in a personally meaningful way. A regular donor to the institution, he nonetheless longed to make a greater impact.

“I think it’s part of the beauty of being able to give back,” Neville says. “I’ve always appreciated what [DU] did for me personally. An excellent university took a chance on me early, and it gave me a platform for my life.

“I don’t need my name on a building. What’s more lasting is experience.”