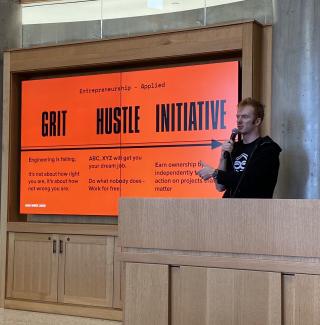 At the end of February, the Ritchie School of Engineering & Computer Science hosted the annual Engineers Week. 2018 DU graduate Daniel Farrell gave a presentation at the end of the week titled “Bringing an Entrepreneurial Mindset to Industry.” Farrell’s story of success is a bit more unconventional–but his methods to landing his dream job can be utilized by anyone by incorporating “grit, hustle, and initiative.”

Farrell majored in Mechanical Engineering, but quickly discovered a passion for business. He took advantage of campus programs and opportunities, such as participating in the Project X-ITE Pioneering Summer program, getting involved with the business school, and even co-founding the on-campus entrepreneurship club Dynamize. From a young age, Farrell showed interest in transportation and mobility, later blooming into an interest in ridesharing companies such as Uber and Lyft. As an undergrad with a newfound love for business and entrepreneurship and a longtime love for transportation methods, Farrell, along with three other students, started their own company named “Wanderlift.” Wanderlift was a rideshare company that brought students exclusively to the state’s mountain destinations however, when state regulation required them to pay a large fine to continue their business, Farrell and his co-founders decided to move onto new projects. Farrell learned that you have to take risks and fail to learn; “it’s not about being right, it’s about being ‘not wrong’” as he likes to put it. Even with this first downfall, Farrell demonstrated “grit” in pursuing such an endeavor as an undergraduate and “hustle” in continuing to pursue his dreams of being involved in the mobility business.

Now, Farrell works as a Global Expansion Strategist with Bird Scooters, the dockless last-mile shared electric scooter company. Although, he didn’t take the usual route of sending out resumes and hoping for a response, instead, Farrell took “initiative” by messaging thought leaders in the mobility industry on Twitter. This unconventional method landed him contacts with top companies and also gained him some valuable guidance and connectivity to quickly “scoot” to the top of the industry.

When Farrell landed his job with Bird scooters, he was one of only 300 employees, now, the company is working with over 1,000 employees and is expanding into new international territory such as Asia, Latin and South America, and the Middle East, in part, thanks to Farrell. He was a student who chased his passions down every possible avenue, took initiative to land his dream job, and continues to take risks in his career to make a difference in his industry. Down the road, Farrell’s dream is to start his own mobility company and with his track record so far, there’s no doubt he will accomplish this, too.