The society formally welcomes three new Juniors and two Seniors into the society. 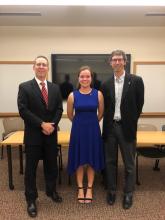 The Tau Beta Pi engineering honors society initiation took place Thursday, October 24 formally welcoming three new Juniors and two Seniors into the society. Juniors are Charles Sears, Anni Heck, Samuel Mattei; Seniors are Markus Hurd and William Fugut. Students are offered a position based on their academic record and GPA–juniors in the top eight percent of their class and seniors in the top five percent of their class are invited to join.

Founded in 1885, this year marks the 113th year for Tau Beta Pi. It continues to be one of the oldest and most prestigious honor societies in the country. The original Colorado gamma chapter at DU spanned from 1954 to 1974 but has been inactive up until last year in 2018. Prior to 1974 women nationally were not allowed to join the society, making 2018 the first year for the DU chapter to officially welcome women. Hayden Dean, a senior and President of the DU chapter was among the first of the women to be initiated last year–an accomplishment she seemed to be proud of. She said in regard to the honor of being a member: “There is national prestige in being a member. If an employer has the option to hire someone who is not a part of Tau Beta Pi versus someone who is, the employer is going to be hiring the person who is a part of our society–you know they are a good candidate.”

The students enjoyed the honor of having the National President of Tau Beta Pi, Wayne Paugh, in attendance for their initiation. In response to why he decided to attend this particular initiation he said, “I don’t attend all events and initiations, but I’m a Colorado local and I care about the University of Denver thriving…a University as prestigious as this one should have a prestigious honor society such as Tau Beta Pi.” It is indeed an honor to be a part of this society– some well-known members are Jeff Bezos, CEO of Amazon; Michael Bloomberg, a politician, author, and businessman; and Buzz Aldrin, the second man to walk on the moon. As shown here, and as Paugh explained, members of Tau Beta Pi go off to have careers in all different fields of work. It breeds hope for students knowing they are a part of such a successful network of people.

The initiation that took place was a secret ceremony in which the department chair, Mathew Gordon; the National President, Wayne Paugh; the current members of Tau Beta Pi, and the incoming members are all a part of. No one from outside of the society is allowed to be in the room during initiation. The students sign a logbook at the end which contains every member signature in the DU chapter dating back to 1954. President Paugh reflects, “I picture myself in these students and the excitement and hope I felt when I sat in my own initiation all those years ago” he adds, “chapters thrive because the students within them believe in something and believe in themselves to do great things.” Paugh added that he feels good about this year’s recruits and their future endeavors now that they are a part of Tau Beta Pi.

The DU chapter is looking to take over Engineering Week on campus, scheduled for later this spring, and expand their overall presence on campus. In the coming years, the chapter hopes to have more frequent events and gatherings for the members on campus and beyond. They hope to be more widely recognized on campus and to set the bar for greatness for engineering students. The President said, “not only do students get accepted because of their GPA, that is important, but mainly we want students who show a good sense of character, they are selfless, and they are full of integrity. That’s really what’s important to us and to this society.”