Ritchie School's Dominick Biggs Makes the Most of a Surprise Stopover 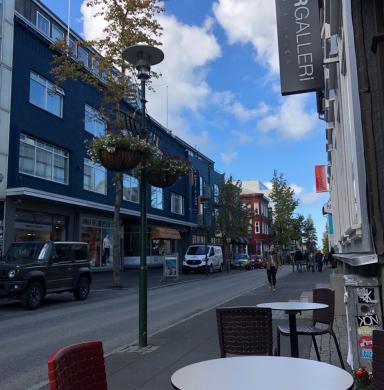 Dominick Biggs (MME) recently began the Ritchie School of Engineering and Computer Science's 3-1-1 abroad program in Scotland at the University of Glasgow. Before he arrived; however, he found some unprecedented beauty in Iceland.

He flew into Reykjavik on a Sunday and had planned on only staying for the day before flying to Glasgow early Monday morning. So he rented a car and got down to exploring and seeing what he described as, "a ton of BEAUTIFUL sights."

When he came back to the airport, he was told that his plane had been overbooked. For many people, this news might have ruined their day, but not for Dominick! He gladly helped out his fellow travelers and took the airline up on their offer of a room and board for another day in Iceland. He spent the day eating, drinking, and exploring, "the absolute cutest city ever made!"

His Icelandic adventure seemingly over, Dominick headed back to the airport again only to be informed of yet another overbooked flight. Not to worry, though, he said, "I spun around, told 'em I was happy to stay again, we all had a good laugh, and I got another paid day in Iceland!" They even overbooked the following day, too, prompting him to wonder if he should consider, "making a career out of staying [in Iceland]..."