Can you tell us a little bit about your background? 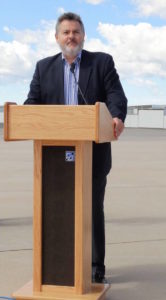 I’m Kimon Valavanis. My area of expertise is in robotics and automation. I have worked in the area of robotics for about thirty years and during the last twenty years I have worked in the area of unmanned systems. Unmanned systems include underwater vehicles, sea-surface vehicles, mobile robotics, and aerial vehicles. The focus of my research is mostly on ground robotic vehicles and aerial vehicles.

By education, I have degrees in electrical and mechanical engineering and computer and systems engineering. I joined the University of Denver almost nine years ago on September 1, 2008, as the Chair of the Electrical and Computer Engineering department. Since I came to DU, I established the unmanned systems institute, formally called the DU Unmanned Systems Research Institute or DU2SRI. I direct DU2SRI along with Professor Matthew Rutherford from the Department of Computer Science. The objective of DU2SRI is to advance research and development in the area of unmanned systems. We build our own prototypes, we do the navigation controls, the electronics, the avionics, both software and hardware, the flight control system when it comes to the aerial robots, and also the whole navigation control suite when it comes to ground UGVs (unmanned ground vehicles).

What has been your role with the International Conference on Unmanned Aircraft Systems?

What are the goals of ICUAS?

ICUAS advances research in state of the art technology, development, procedural issues, legal issues, ethical issues and regulations that have to do with unmanned aircraft systems. The purpose of the conference is to gather experts from all over the world who are scientists, engineers, students, faculty, researchers, researchers, practitioners and users to find out what is going on. And the objective is not only technical, it is also non-technical because you cannot just have a UAV and go outside and fly. You will violate the law and FAA regulations. So the legal framework, the regulations, the policy framework, ethical issues, privacy issues, are very

important and the conference addresses all those issues. It also suggests and recommends solutions for the next step. So this is what the conference is all about.

Is this conference the only one of its kind?

No, there are other conferences that in UAVs as a specific concentration among others. This conference is not the biggest one, but it is highly concentrated solely in UAVs. So from that point of view, it is the only conference in which you can publish papers and submit papers which relate only to the area of UAVs. DU plays a vital role because DU sponsors this conference.

How has the conference grown throughout the years?

In 2008, we started with only 30 people. In 2015, there were 250 people that attended the conference. Although the conference has grown, we don’t want to make it too big because we want to have interaction among the members. If you have a conference and there are 2,000 people, then you just run from place to place.

How are students from DU involved in the conference?

Yes, there are students, my whole group goes there. Out of the 250 people, one-third is students—graduate students.

What is your future vision for this conference?

The Institute of Electrical and Electronic Engineers (IEEE) has a robotics and automation society. The robotics and automation society has different technical committees. So the technical committee on aerial robotics, which I am a member and co-chair of, got the best award for the best activities world-wide in 2015. So the conference is one of our activities, and DU is involved because of its sponsorship in the conference.

Is there anything else you want people to know about your field and your work?

Everybody refers to UAVs as drones. However, the word drone is basically used for military applications like a missile. But UAVs or unmanned aircraft vehicles are remotely piloted aircraft systems that are not necessarily drones. UAVs cover a broader scope of vehicles and can be used for civilian applications. Also, people are intrigued by the word unmanned. There is nothing unmanned in an unmanned system. You need four operators on the ground to control

one such vehicle. So there is no pilot on board but there is a pilot on the ground. It is not unmanned—that is a big misconception in the area. People do not understand that. There is nothing unmanned in an unmanned system. This is not my expression, Mike Tuscano, former CEO of AUVSI (Association for Unmanned Vehicle Systems International), said that.