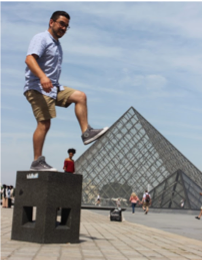 The Sustainability Squad finally made their way to the city of lights and love, not Vegas, but Paris! Although we're also there for engineering and sustainability, our priorities were set in stone. This was our time to binge eat croissants and explore the culinary endeavors of Paris. We met our wonderful tour guide, Priska, a Madagascar native that came to France when she was little, but still knows how to turn up in the city! After battling the nightmare traffic, we explored the local market of Quinze – Vingts, a vintage area filled with shopping areas, addicting food, and most importantly, a cutie-patootie, fluffy-wuffy Chow Chow!! This area had amazing patisseries that even Mary Barry would call an absolute joy. This place put a smile on our faces, and we were all excited about our amazing start in Paris!

As the trip continued, Priska warned us to stay away from people that wreaked of ennui, as there was a possibility, they would rob us. Rather than having anxiety over getting robbed, all of us were excited with a challenge accepted mindset to not be robbed. We eventually dropped our stuff off at the hotel and went off on an eating adventure! From smoked mackerel to herbed escargot, French cuisine had it all! We all ordered a bunch of starters and practically inhaled them all! The food was absolute perfection and were worthy of a Gordon Ramsey praise. The day ended and all of us, after a few drinks at the bar, passed out, hoping to get some rest before the next adventure.

The sun creeped through our windows as a blast of air conditioning swept through our rooms. Even though the sun was blaring 103˚F outside, our rooms were a delicious 70˚F! We were so cozy that we absolutely did not want to get out of bed! We eventually forced our way out, got ready, and headed to breakfast. They had a snazzy machine that juiced fresh oranges for breakfast! After binge drinking OJ and speed eating croissants, we casually walked toward the bus, slightly late. The food made it worth keeping everyone waiting. We hopped on a bus, screamed Miley Cyrus lyrics, and headed toward the Louvre. The Louvre is the world’s largest art museum and was originally built as a castle under Phillip II (late 12th, early 13th century). Rather than listen to the history, we took a more fun approach of pictures gone wild with the poses that rival those of Tyra Banks! 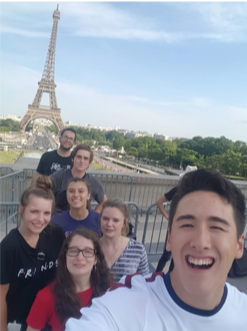 After the Louvre, we walked our way through streets that had antique architecture. We eventually got to an engineering company that tested different soil variables to yield highest rooftop agricultural yield. They test different types of compost, mineral content, and controlled soil specimens. This is very applicable to engineering in Denver. In Denver, since 2018, larger buildings in the Mile High City are required to have green roof features, including roof top gardens. Going through the Paris rooftop garden allowed us to explore an awesome engineering field that requires innovating the next rooftop apparatuses.

Before ending the trip, we had one last stop, the Eiffel Tower! We took the train to this magnificent sight and enjoyed its beauty. With the Eifel Tower being the last event of the day, technically night, we got back to the hotel super content.

Paris was a fun-filled, energy bomb that we all absolutely loved! Examples of Agence d'Ecologie Urbaine’s work in sustainability initiatives in Paris, like organic foods in public schools and neighbors planting around trees in the city were special to see. Its young citizens doing what they can to improve the environment in Paris to the best of their ability. Shout out to Priska for showing us how fun Paris can be!