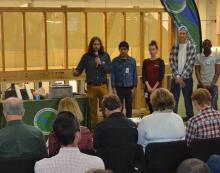 Five teams of engineering students from Metropolitan State, the University of Denver, Colorado School of Mines, and the University of Colorado Denver recently competed in the Clean River Design Challenge (CRDC), a yearly challenge hosted by The Water Connection, a subsidiary of The Greenway Foundation. The aim of the competition is to develop methods to filter out the solid waste that finds its way into rivers.

This year, the teams designed a system specifically targeting a section of the South Platte River confluence, upstream from Cherry Creek. This challenge was held in two rounds. Round one entailed design presentations and took place on December 5th. The designs were then tested and judged in round two on April 18th. The challenge was held at the U.S. Bureau of Reclamation Hydraulics Lab at the Denver Federal Center. There, each of the teams presented their designs in a water-filled chamber to see how effectively their designs filtered trash out of the water. The designs were tested under varying flow rates to test their performance in real-world conditions.

CRDC competitor and University of Denver senior, Joe Burke, described his team’s process in an interview. “In September we started the design of the project. While nearing the end of the fall quarter, it was finalized, and in the first stage of the CRDC, we presented our design for rating and feedback.” It was there that the team met their first set of major obstacles. There was some difficulty in obtaining critiques for improvement of their project. The building process of the model was also met with some challenges, as required downsizing to 1/12th of the intended model provided issues. Bolts that were too large, an arm that wouldn’t close, a lack of structural integrity to handle the water: these were all problems that the team had to assess and fix as part of the engineering process. However, their persistence was fruitful.

When asking Burke about the most rewarding part of the process, he replied, “Coming up with a design and building something, while knowing that it isn’t to sell for money, but to improve the health of the river and to bring people to parks is the best part.” When asked how he felt about the project overall, Burke answered “It was just unexpected… seeing myself use the equations we learned in class on our project and seeing the forces of the water on our project… 1 MPa doesn’t sound like a lot, but it’s so much water.”