Data Visualization Shows We are Not Divided Into Red/Blue States

Data visualization can be used to help people better understand data and provide insight, or, if poorly used can (un)intentionally mislead or confuse. While some people, accountants and financial analysts for example, can look at tabular data and gain insight and see trends, most people cannot. Even for people who work with data day-in and day-out, large volumes of data quickly overwhelm the ability to understand the raw data. Instead, data visualization is used to convey information in a way that is more easily understood by all. The field of data visualization draws from computer science, statistics, design, and psychology. Because human perception is involved, visualization effectiveness is impacted by technique, color, and scale. For example, some people respond well to stacked bar charts while others respond better to scatter plots or bubble charts. This year’s election data has again centered focus on the ubiquitous red/blue choropleth maps of the U.S. You know, the map where the center of the country and the south is mostly red while the west and northeast are mostly blue. This has a psychological impact of leading people to conclude that the majority of the country vote Republican. This is great if you are a Republican activist, a problem if you are a Democratic activist, and just wrong if you want to make accurate data visualizations! Even worse, it leads one to conclude we are a country strongly politically divided by region.

Recently an article published in Fast Company addresses this issue and provides an excellent alternative visualization. The article presents Belgian designer Karim Douïeb’s visualization of the 2016 presidential election data. The first animation replaces states with bubbles proportional to the vote (population) in that region and colors those bubbles red or blue. While this is certainly an improvement over the canonical U.S. choropleth election map, and clearly shows the U.S. electorate is not dominantly Republican, it still is misleading. For example, if one looks at the west or the northeast the visualization makes those areas look almost purely Democrat, which is also false. 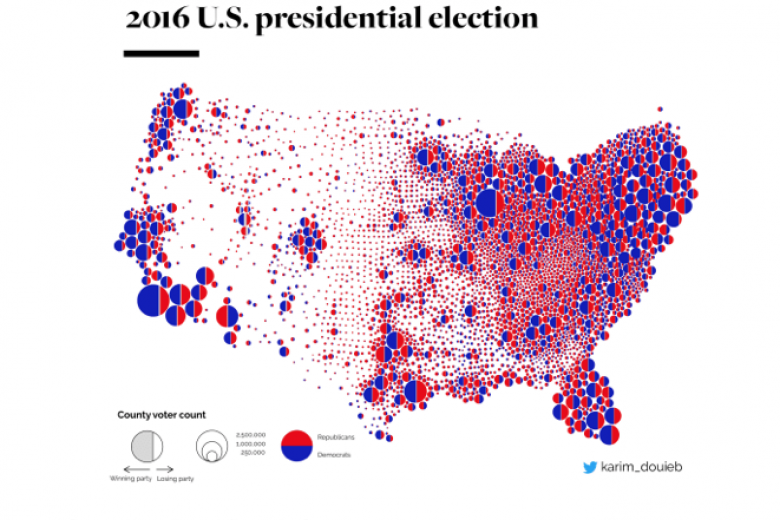 Douïeb’s final visualization, above, which uses bubbles for the vote across the country proportional to the number of votes, also splits the bubbles into the Republican/Democrat red/blue percentages within each bubble.  This map drives home that the U.S. is not divided into red/blue states, rather, the electorate is mixed throughout the entire country. Regardless of where we live we have a significant number of neighbors who vote both aligned and opposite how we vote. As quoted in the article, “Land doesn’t vote, people do.”

This map makes clear the fallacy of how we could just “split the country into red/blue countries”. Instead, we should recognize how mixed together we are and hence how imperative it is we learn to work with each other across political ideology. This visualization achieves the goal of good data visualization by presenting data in an accurate and easy to understand way that can then be used to inform decision making. In this case, perhaps offering insight showing a more unified view of the country could result in improvement of our society.