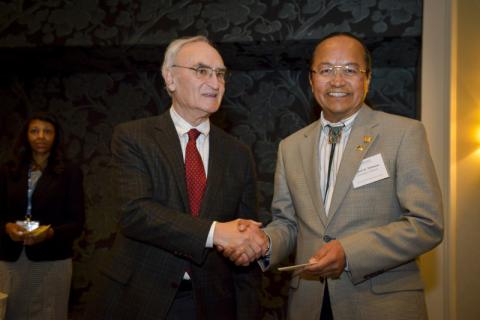 Definition of a fellow from AAAS:

“The tradition of electing AAAS Fellows began in 1874 to recognize members for their scientifically or socially distinguished efforts to advance science or its applications. Fellows must be nominated by one of the steering groups of the Association’s 24 sections; by any three Fellows who are current AAAS members (as long as two of the three sponsors are not affiliated with the nominee’s institution); or by the AAAS chief executive officer.” [www.aaas.org/news-aaas-fellows-recognized-their-contributions-advancing-science]

What it means to me.

I grew up in a rural community and had only one American Indian mentor with an education in the STEM field, who was one of my math teachers in junior high school. It was pure chance that I ended up in the engineering field. My main mentor was my father who taught me how to work and study hard to succeed in whatever endeavor I chose. His formal education was up to the sixth grade. I had other non-Indian mentors who helped me chart a course in my undergraduate educational path, in my professional career and my pursuit of a doctorate in engineering.