Adventures Around the U.S. 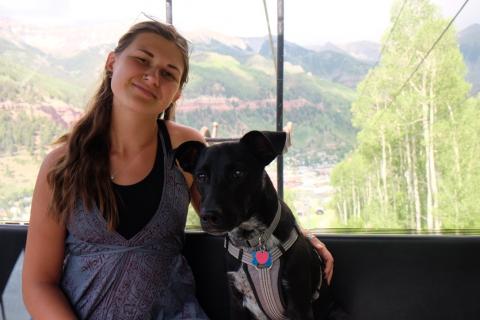 For those of you who don’t know me, my name is Aurora VanDam and I’m a student reporter for the Ritchie School of Engineering and Computer Science. I first began working here last fall, and I’ve been writing stories about Ritchie School students, faculty, and events for about a year and a half now. I can often be found around campus interviewing students and faculty for fun stories to showcase our amazing school. I am a creative writing major and a sustainability minor. While I’m heartbroken to not be interviewing and interacting with our wonderful community in person, I managed to make the best of a less than ideal year and traveled to campsites and hiking trails around the West while staying socially distanced.

I spent two weeks this summer traveling with my partner, Jeremy, and my puppy, Comet, around Colorado, Utah, and Arizona. We traveled by car, avoided spending time in major cities, and socially distanced on hiking trails and in campsites. We also spent a week near the Grand Tetons in Wyoming on a separate trip later in the summer.

We first traveled to Moab, Utah, where we spent two nights in a dispersed campsite near Chapel Rock. Some of you may know this area for its famous rock-climbing terrains. While we didn’t do any climbing ourselves, we got to enjoy the clear desert night skies, and Comet learned not to sniff ant holes, which were plentiful around Utah. After Moab, we traveled a few hours south to Zion National Park in Utah. We camped outside of the park in another dispersed free camping area off of Kollob Terrace Road. For the majority of the trip we camped in free dispersed campsites. We did this for two reasons: first, it’s a cheap way to travel—we used a website called “freecampsites.net” where plenty of free camping can be found around the country; second, dispersed camping is much less crowded so we could best adhere to social distancing guidelines this way. After two days of hiking around the hot desert in Zion, we drove further south to Arizona.

In Arizona, we ventured first to the outskirts of Flagstaff, where a nice camp spot in the neighboring San Francisco Mountains could be obtained. We spent two nights among the tall pines almost completely alone. This camp spot was by far the most isolating—we didn’t see another camper around us for our entire time there. Comet learned he is scared of howling coyotes! They could be heard for miles around every night. It was bone-chilling for me and Jeremy as well.

After our final night in the San Francisco Mountains, we were off to the Grand Canyon. Because the Grand Canyon is such a built-up area, there was no dispersed camping available here and we had to camp at a paid site about ten minutes away from the entrance of the park. The paid site had its perks, it was filled with elk! There were elk laying around all throughout the sites. We spent a day driving around the park and getting out to sight-see at the less crowded stops along the canyon. Since we had Comet with us, we weren’t able to do any hikes in the Grand Canyon. It’s too hot there for him to exert much energy, and there’s no trails that were available for dogs.

The next morning, after a full day at the Grand Canyon, we left to head toward Telluride, Colorado. This is by far my favorite place on Earth, so we spent the most time in Telluride out of all the other stops. Comet took his first gondola ride there (and it was my first time too). We stayed four nights camped in the Town Park campground and spent our days exploring the many waterfalls and hiking trails surrounding the town. Comet loved playing in Town Park with all the other puppies every day, too. From Telluride we went back home to Denver.

A few weeks later, sometime in July, we took a last-minute trip to Wyoming to visit the Grand Tetons, as well as some friends who travel around the country in a converted bus. Comet didn’t come with this time since he wasn’t allowed in the park, but he had a fun week instead with his grandparents and their dog. We camped about 20 minutes away from the park entrance in a gorgeous dispersed campsite deep in the woods. The mosquitoes were science-fiction sized, and the buffalo were bountiful. We spent a lot of time in the lakes at the base of the Tetons and were fortunate enough to do a self-guided rafting trip down Snake River with our friends. This was our favorite destination of the summer by far.

For the remainder of the summer, we spent a lot of time hiking with Comet, and I personally tried to read as many books as possible before classes started again. We were extremely fortunate to have traveled so much this past summer and were thankful that we were able to do so in the safest manner possible given the circumstances.