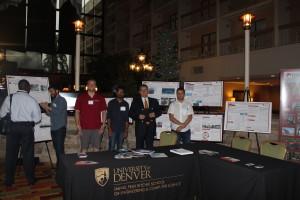 The ICUAS’15 took place on June 9-12, 2015 in the Denver Marriott Tech Center, Denver, CO. The Conference was financially sponsored by the ICUAS Association Inc. (www.icuas.com) and was technically co-sponsored by the IEEE Control Systems, CSS (www.ieeecss.org) and Robotics and Automation, RAS (www.ieee-ras.org) Societies, as well as by the Mediterranean Control Association, MCA (www.med-control.org).

The ICUAS Association, a non-profit organization, was launched in 2012 and the most important activity of the Association is this annual conference, aiming to serve as the flagship technical conference in unmanned aviation.

ICUAS’15 was a very successful event on all fronts. It was attended by a record number of 230 participants from academia, industry, government agencies, end-users and practitioners, and by a large number of students. The Conference included exhibits from several companies. Participants had deep interest in the state-of-the-art and future directions in unmanned aircraft systems. In response to the Call for Papers, a record number of 231 contributed and invited session full-length papers were received. The review process was very thorough and rigorous. 364 reviewers were actively involved in the paper review process, submitting more than 833 review reports. On average, each paper went through 3.6 reviews (up from 3.16 reviews in 2014). However, considering that the Program Chairs and other members of the Organizing Committee coordinated all papers reviews and read all papers, each paper received in reality 3.6+1 = 4.6 reviews. A total of 582 authors contributed to 168 accepted papers. The Technical Program included four parallel tracks per day for a total of 36 Technical Sessions. A novel feature of ICUAS’15 was a panel discussion on “UAS in the U.S. Homeland: The Threat of Small Unmanned Aerial Systems to Critical Infrastructure”, which was organized by Colonel Dawn M. K. Zoldi, Staff Judge Advocate, U.S. Air Force Academy and was moderated by Colonel Angie Suplisson, Director, USAFA UAS Center.

It is very encouraging to observe that this annual conference is gradually earning the respect of the very demanding technical audience, scientists and engineers working in this area. To be exact, and in order to give you an idea of the rate of growth of the conference, ICUAS submissions have jumped from 42 in 2009 to 231 in 2015.

The Organizing Committee members devoted an enormous amount of time and effort to make sure that the Conference was exciting, informative and educational. The Organizing Committee extends a wholehearted “thank you” to all authors, reviewers, Associate Editors and members of the Technical Program Committees; their help was integral to assembling a top quality Technical Program. We specifically thank Dr. Pradeep Misra who was the essential “glue” that kept everything together, since all papers were submitted through https://controls.papercept.net, managed by Pradeep. He has been indispensable throughout, and we wouldn’t have been able to complete the paper review process without his help. Last, but certainly not least, we thank the IEEE CSS and RAS, and MCA for their support over the years.

ICUAS’15 was an exciting event. We look forward to the 2016 conference in Washington DC – the venue will be the Key Bridge Marriott in Arlington, VA. For details about the 2016 conference, please visit www.uasconferences.com, or e-mail Kimon Valavanis at kimon.valavanis@du.edu.